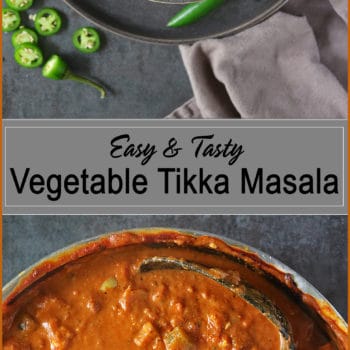 This fusion Easy Vegetable Tikka Masala is jam packed with veggies coated in a tangy, luscious, and deliciously spiced sauce – check out the recipe below and happy cooking!

This recipe was first published on November 10th, 2017. It has since been updated and is being republished today.

Even after all these years, three little words strung together, can be so powerful.

They are just a bunch of black on white … right?

But, three little words “chicken tikka masala” can have the spittle trying to escape out of those glands in the back of my mouth like my dog trying to escape my hold when he sees a squirrel!

Way, way back when I was a teenager, chicken tikka masala was synonymous with the beginning of the weekend.

Back then, I lived in Abu Dhabi with my parents, and most Thursday nights (Friday was our Saturday) my dad would head to the little Indian Restaurant on the corner of the block and bring home packages of delicious-smelling chicken tikka masala, fish masala and buttery parathas.

And, my parents, sister and I would tear into them like bears waking up after winter (only, we woke up from our “winter” every 6 days.. hehe ).

Chicken tikka masala was foreign to our Sri Lankan tastebuds then and we were not able to get enough of it.

That creamy, tangy, oh so tastily spiced sauce that so generously and lusciously coated chunks of tender chicken …or fish … and those flaky, buttery parathas (so different from the rotis we were used to)- ahhh …those were the Thursday nights of such gluttonous bliss!

Recently, I was talking to my daughter about those Thursday nights and she asked if I could try making a tikka masala.

As she is was a vegetarian, I opted to use cauliflower, carrots and green pepper in a vegetarian version. This came out so much better than we expected, my daughter suggested it had to be shared on here (lest I forget the recipe and never make it again).

I won’t say that what you see here is an authentic tikka masala but more a fusion one. One that is made with ingredients you will find at your neighborhood grocery store.

But, still, one with a creamy, tangy, oh so tastily spiced sauce that so generously and lusciously coats chunks of veggies. One that is a delight to eat as is (yes, we ate bowls of these like we would soup) or sopped up with naan (which we also picked up at our neighborhood grocery store).

Whether you give this delicious yet super easy Vegetable Tikka Masala a try or not, I hope this week will be filled with something delicious for you, something that will have the spittle trying to escape out of those glands in the back of my mouth! Happy Cooking AND Eating until next week!

This recipe can also be found on Honest Cooking.

Please tell me how to make fire roasted tomatoes

[…] like a boss – I cannot. And usually when Thursday comes around, our stockpile of sautéed, curried and charred vegetables has dwindled to […]

Shashi, I've missed you!! Meanwhile, I missed not just you, but your gorgeous and truly droolworthy photos of food. Is it just me or did my stomach just growl??? I'm getting so hungry just staring at these pics! Love that it's so tasty and easy to make. Nice chatting with you, friend! <3 Hope you have an awesome week ahead! :)

That is so cool that you had an Indian market down the street when you were growing up. Traditions like that (your Dad stopping by to get Indian food each week) are what make childhood memories so fun! Speaking of fun, this tikka masala sounds amazing. I made Laura chicken tikka masala back in the spring, and I went all out...made my own garam masala and everything. It was a lot of work, but it was a lot of fun, too. In fact, I might still have some of that garam masala in the freezer. I should try it out with this veggie version! It looks amazing, Shashi, and now that the recipe is out here, I say you get Lil Shashi to make it for you next time. :-)

I adore Indian food but hardly ever make it home. Will have to try this!