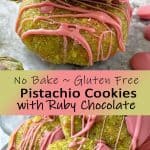 Pistachio & Ruby chocolate unite in delicious harmony in these gluten-free, no-bake, Pistachio Cookies with Ruby Chocolate. Made with only 7 ingredients, these no-bake cookies are high on the nutrition scale as well!

Even though ruby chocolate has been around since September of 2017, it was completely off my radar, until a couple of months ago.

I was watching an old episode of Sugar Rush in which contestants were challenged to use ruby chocolate or blonde chocolate in a round. And, my curiosity was piqued!

I love chocolate. I thought I had tried almost every kind of chocolate there was. Clearly, I was wrong.

When I first caught a glimpse of ruby chocolate on Sugar Rush, I thought it was a union of beets and white chocolate. Then I did some Googling and found out how wrong I had been (again

Nowadays I feel like I’m seeing it EVERYWHERE! The other day, there was an ad for ruby chocolate Kit Kat that popped up on my computer. Then there’s the ice cream aisle where, everywhere I look, there’s Ruby chocolate dipped bars and cones!

So, I decided to make some cookies with some of the ruby chocolate chips I had left. And, you don’t have to turn on your oven in the middle of summer to make these.

We Love These Pistachio Cookies with Ruby Chocolate because:

The only dough-chilling you will be doing is after you mix up the ingredients together, form the cookies and need them to set a bit.

And, these healthyish cookies are made with maple syrup instead of refined sugar.

I find the combination of pistachio and ruby chocolate to be delightful. And it’s a combination that happened quite by accident.

I was trying to make some ruby chocolate truffles, and the mix was just not firming up. My daughter suggested rolling the truffle mix in some ground pistachios and I did (I usually grind a couple handfuls of pistachios and have “pistachio floor” on hand to add to pancakes, crepes, or yogurt).

While the pistachio coated truffles were still more like cheesecake than truffles my daughter popped one and then another in her mouth and started swooning over the combination of pistachios and ruby chocolate. And well, who am I to argue with the tastebuds of a college senior – eh?!

* You can make pistachio flour easily by blending 1 cup whole pistachios, in a blender into a "flour-like" consistency.

[…] to dip, drizzle, and dunk these cookies in milk and white chocolate and some of them got a little ruby chocolate […]

They must be amazing loaded with pistachios! I love those cute ruby chocolate chips...so adorable.

Ruby chocolate truly a cool invention! Did you see that there's a new kind of chocolate out now? Something about a rainbow sheen on it. Either way, I'm happy with these pistachio cookies. In fact, I could make a batch of these disappear today. :-)

These look so pretty! I would love to find some Ruby Chocolate here to experiment with :)