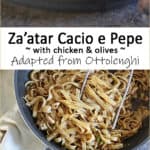 This one-pot Za’atar Cacio e Pepe Recipe with chicken and olives is a spin on traditional Cacio e Pepe. Inspired by Yotam Ottolenghi, this recipe gets a flavor boost from za’atar and garlic and is a quick and easy family favorite in our home.

My daughter loves Cacio e Pepe. When we had the good fortune to vacation in Rome, she enjoyed Cacio e Pepe like I enjoyed Crema di Limoncello. And, ever since, she has been churning out silky smooth Cacio e Pepe whenever I put her in charge of making a side dish to dishes like this sweet-spicy air fryer salmon or this cilantro lime chicken.

Recently, when I asked her to whip up some Cacio e Pepe to accompany this Miso Glazed Cod, she surprised me with Ottolenghi’s jazzed up Za’atar Cacio e Pepe recipe.

Now, I love my pasta with an extra dose of spices, so I had to have seconds of this tangy, herbally version.

However, Yotam Ottolenghi added a generous helping of za’atar along with pepper to his version. I have come to understand that adding other ingredients to traditional Cacio e Pepe can be frowned on, with some saying that Cacio e Pepe just isn’t Cacio e Pepe if the traditional recipe is altered.

But, I found it hard not to share this dish which is a delightful fusion of Italian and Middle Eastern cuisines – especially since I added my own spin and turned it into a one-pot meal with the addition of garlic, onion, chicken, and olives. I know, I know, this just might be blasphemy! But, it is well worth a try.

We love this Za’atar Cacio e Pepe Recipe because:

✔️ It is SO flavorful,
✔️ It is So easy,
✔️ It is a one-pot meal,
✔️ It requires ONLY 9 pantry-staple ingredients,
✔️ And, did I mention – it is SO incredibly tasty!

Wondering what is Za’atar?

Za’atar is a highly aromatic herb and spice mix, usually consisting of sumac, sesame seed, and herbs. It is popular in Middle Eastern and Mediterranean cuisine. I love using za’atar in chicken dishes as well as in pasta dishes like this one.

How to make this Za’atar Cacio e Pepe:

These are a few tips that I found handy when making this easy one-pot Za’atar Cacio e Pepe Recipe:

We are on the same wavelength! I have been playing around with Cacio e Pepe and made a few alternatives this past weekend to test them :) Yours looks so good! Be safe, Tandy

While I like more rich and filling pasta sauces every now and then, I do love  Cacio e Pepe for its simplicity yet an excellent flavour profile. And adding za’atar? Why not! It has some lovely lemon aroma that must nicely work with other pasta ingredients. It looks delicious, too!

Cacio e Pepe is one of our favorites, too. Quick and easy to prepare, and SO good. Haven't added za'atar to it -- neat idea. Gotta try that. Thanks!

Woah. That plate of pasta. It needs to be in my kitchen ASAP! I absolutely love cacio e pepe - the simplicity is the grace of it. But then amping up that recipe with za'atar? I'm intrigued! This sounds like it's packed with flavor! It's going on the menu soon...well, unless you deliver? :-)