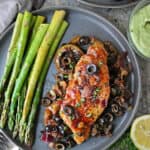 A delightful balance of sweet and tart flavors, this Honey Lemon chicken with caramelized lemon slices and olives is served with a spicy Wasabi Avocado Cream Sauce and asparagus for a flavor-packed, low carb dinner you and your family will delight over.

*This post was first published in February 2015. It has since been updated with pictures and content and id being re-published today.

In late February of 2015, temperatures that hovered around 20 Degrees Fahrenheit (-6 C) made it hard for me to do anything outside for an extended period of time!

A 20 minute walk around the block with the dogs becomes a 10 minute power walk; trash isn’t walked to the curb – it is sprinted to it; and, I am hoping that the wind I count on to blow my driveway for me, will magically blow away the bits and pieces of the rose bushes I trimmed 2 months ago as well!

But, this cold weather has made it easy for my daughter and I to stick to our old Friday night tradition of catching up on movies we have on our Netflix “to-be-watched” list (which in 2020 is still a tradition for us ~ time permitting).

One movie we both fell in love with after watching the trailer, was Big Hero 6!

It was so hard not to fall head over heals for the completely guileless, kind and compassionate, disease-diagnosing, and, warm and marshmallowy “Baymax” – who was the invention of “Tadashi” {besides, how could I not love something made by someone that rhymes with Shashi-right?!  🙂

While the movie is marketed as “an original action-comedy-adventure“, the bond formed between Baymax and Hiro (the teen star of the movie who is Tadashi’s brother), tugged at my heart strings with it’s lessons in helpfulness and self-sacrifice as Baymax helps unite Hiro’s diverse group of friends: Go Go, Wasabi, Honey Lemon and Fred—to band together to fight the evil that lurks in “San Fransokyo“.

As our movie nights (then and now) involve food of some sort; this time, I decided I would prepare something that would pay homage to some of the characters in the movie…and… this Honey-Lemon Chicken with Wasabi Avocado cream sauce was the result.

When I first made this dish, I also made some vanilla infused rice to go with it. It was winter, and comforting carbs paired so well with the honey lemon chicken with caramelized lemon and olives.

But, with temperatures warming up for us here in late May of 2020, I opted to make some of this garlic asparagus to pair with the Honey Lemon Chicken.

This time around, my daughter made the wasabi cream sauce and figured that she was better at mushing the avocado than a blender was and so our wasabi avocado cream sauce was a tad bit lumpy. She also decided to double the quantity of wasabi and I felt like my nose was on fire when I sneaked a taste!

Now, this recipe title is a mouthful – but, it is alot easier (and quicker) to make than to say!

Let’s have this Honey Lemon Chicken Dinner Done in < 40 minutes!

2) While waiting for the rice to come to a boil, chop the onions, garlic and lemon and set a pan on the stove on a medium flame with some olive oil in it.

3) Cut the vanilla pod open and scrape the vanilla beans into the boiling rice. Lower the flame on the rice, cover and let simmer for 15 minutes.

4) Then, over a stove top set to medium heat, saute the onions and garlic in a heavy bottomed pan with the olive oil for about 5 minutes – stirring constantly, add the lemon slices and let cook for 5 more minutes, then flip them over. Then add in the lemon juice and honey.

5) Season the chicken with paprika, salt, and pepper and add it to the lemon/onions/garlic/honey mix and let cook till brown – about 8 minutes.

6) Take the rice off the heat and keep covered (if serving with rice).

7) Flip the chicken over and add water and olives and cover and let cook for about 8 minutes.

8) Cut strips of the vanilla pod to decorate the rice with (if serving with rice).

9) Cut the avocado and add it to a blender with the yogurt, wasabi and milk and blend well.

10) Make rice mounds using a bowl to resemble Baymax and decorate with strips of vanilla pod and olives – and refrain from digging into the vanilla infused rice as it smells wonderful (if serving with rice)!

12) Add chicken to plates with Baymax-rice or asparagus, drizzle the wasabi-avocado cream sauce or serve it on the side ~ and dinner is done!

From Prep to Plate to Belly in less than 40 minutes!

While the Honey-Lemon Chicken and the Wasabi Avocado Cream Sauce and the Vanilla Infused Rice taste wonderful on their own and can be used with other sides and mains, together, (just like in the movie), they balance each other off wonderfully!

FOR THE VANILLA INFUSED RICE:

FOR THE HONEY-LEMON CHICKEN:

FOR THE WASABI AVOCADO CREAM SAUCE:

FOR THE VANILLA INFUSED RICE:

FOR THE HONEY-LEMON CHICKEN:

FOR THE WASABI-AVOCADO CREAM SAUCE:

If you prefer to keep this meal low carb, then instead of the rice, serve this delicious honey lemon chicken with some garlic asparagus.

[…] slices of Blood Oranges, Lemons, & Cara Cara Oranges until they caramelized (like I did in this Honey Lemon Chicken recipe). I then added the chicken, spices, quinoa, and a mix of vegetable stock and juice from the Blood […]

[…] came across ruby chocolate at Sprouts recently and brought a bag home. A while back, I had watched an episode of Sugar Rush in which ruby […]

This recipe is an oldie but goodie, Shashi! That wasabi avocado sauce sounds delicious. I love adding sauces to all sorts of meals - they're an easy way to take a meal from good to great if you ask me. And the honey + lemon on the chicken sounds super flavorful. I'm all about the lineup of ingredients here, my friend. I need to try a grilled version of this one!

What a great dish! So many great flavors.

It all sounds and looks divine, but I'm sitting here trying to think of how many other ways I can use that sauce! Avocado and wasabi are an amazing combination.