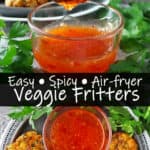 This shop has been compensated by Inmar Intelligence and its advertiser. All opinions are mine alone. #FranksRedHotTailgate
Sneak veggies into tailgating season with these 7-ingredient Spicy Veggie Fritters. These fritters are a quick and easy, portable snack that is gluten-free and dairy-free.

The star of these Spicy Veggie Fritters is Frank’s RedHot® Original Cayenne Pepper Sauce. Frank’s RedHot is the perfect combination of flavor & heat and adds some serious pizzazz to these delicious fritters.

Speaking of Frank’s RedHot, did you know it was one of the ingredients used to make the first-ever Buffalo Chicken Wing in 1964? Frank’s RedHot was created by Adam Estilette & Jacob Frank in the bayou in 1918. Ever since it has grown in popularity and is now regarded as the #1 brand of hot sauce in America that keeps us coming back for more. Crafted from real, select, aged red cayenne peppers, Frank’s RedHot Sauces deliver The Perfect Blend of Flavor and Heat every time.

As the ad said, it can truly be put on everything!

Just the other night, I brushed some eggplant slices with Frank’s RedHot and air-fried them in my Instant™ Vortex™ Air Fryer until they were crispy.

Then, today, I decided to air-fry some veggie fritters using Frank’s RedHot Original Cayenne Pepper Sauce instead of the usual spice blend I use.

My daughter and I love these Easy Spicy Veggie Fritters

What are the 7 ingredients used to make these easy vegetable fritters?

The 7 ingredients used to make these fritters are:

With a smidge of salt and pepper to taste.

How do you make these fritters?

These fritters are so easy to make. If you happen to have some boiled potatoes on hand or grab a couple of baked potatoes from a Kroger store, you can have these air-fried veggie fritters ready in less than 30 minutes!

I started off this recipe by removing the skin off some boiled potatoes. I then added the potatoes to a Pyrex® dish and mashed them up.

I then diced onion and added it to the dish with the potatoes.

I also grated up a carrot and added it to the bowl as well.

This was followed by some thawed-out frozen peas. (By the way, I defrost frozen peas by placing them in a microwave-safe bowl of water and microwaving them on high for a minute or so. Then, I drain them and use them).

Next, I chopped up some parsley and cilantro and added them to the bowl along with a generous amount of Frank’s RedHot Original Cayenne Pepper Sauce and some salt and pepper to taste.

After a good mixing, I gathered up a large spoonful of this mixture and formed it into patties.

At this point, you can store your formed patties in an air-tight dish to air-fry them when needed. Or, you can pre-heat your Instant Pot Vortex to 425 degrees and air-fry these fritters for 10 minutes on each side or until they are crisp.

In years past, I have always been about the food at tailgating and homegating get-togethers. I gotta admit, I rarely have a clue as to what sport is being played. But, I know to fill my plate up with a sample of all the good food there! This year, our get-togethers will be few and limited, but this year I know I will be making multiple trips to my neighborhood Kroger store so I can make multiple batches of these Easy Spicy Veggie Fritters!

You can click here and easily shop online at Kroger for all your ingredients for these and pick them up curbside or shop in-store.

So, will you join me in making a touchdown this 2021 tailgating season by making a batch of these spicy veggie fritters with Frank’s RedHot products and Pyrex + Instant Pot?

Hi, I have a question. I have made these several times, and love the flavor but mine fall apart. I have tried doing more and less potato, yellow, red and russet, but only once they didn’t fall apart when picked up. Any suggestions? Thanks!!

What if you do not own an airfryer? What temperature and how long would you bake them in the oven? Or do you just fry them in oil? I would prefer to bake them though

Potatoes come in a variety of types and sizes. Are white or red best to use? Also, about how much in quantity? One red potato is not equal in size to one baking potato. About how many cups would you say?

Hello Jennifer, You make a good point. You are indeed correct about how potatoes differ. For this recipe I used 2 medium sized yellow potatoes, but in the past, I have also used 2 medium red potatoes and even 2 medium baking potatoes. The potato quantity does not have to be exact. Just two medium boiled potatoes - skin removed. I hope you try this recipe and let me know what you think.

Looks very yummy I am vegetarian so definitely going to make in my Ninja air fryer thank you so much !

[…] add some air fryer veggie options to your meal plan, then make sure you check out these super easy veggie fritters […]