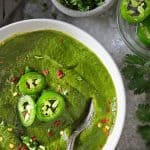 This spinach curry soup is a tasty way to get your greens for the day. Loaded with just a few ingredients, this soup is thick, creamy, and vegan.

This is so good. The last time I made this, my daughter and I polished our bowls clean! What we couldn’t lick off, we sopped up with roti. My daughter and I love this spinach curry soup because it is:
• So tasty,
• So flavorful, and
• So healthy!

What are the ingredients to make this Spinach Curry Soup?

To make this spinach curry soup, you need only 10 ingredients. And, in order of usage, those ten, pantry-staple ingredients are:

Easy steps to make this soup:

After I gathered and prepped all the ingredients together for this recipe, I sautéed the onions first then dropped in the garlic, ginger, and spices just until their flavors jived and jammed and perfumed the whole downstairs.

Then I added in the frozen spinach and let it cook until it was warmed through, stirring it often so nothing was singed.

At this point, this spinach curry soup looks more like a spinach hash ~ and, it looks downright drab. Just a big, sloppy mess parked in a pan!

But, add this big sloppy mess into a blender (with jalapeño and some vegetable stock -use as much or as little as you need to make this as thin or thick as you would like it to be), and magic happens! This mess is turned into an ultra-thick and creamy soup.

This recipe for spinach curry soup is very similar to this recipe for Spinach Curry Sauce. The main difference being this soup does not contain any celery and the ratio of spices and vegetable stock are different.

This soup is one heck of a tasty and easy way to give your immunity a boost! Spinach is rich in vitamins A, C, & K, as well as magnesium, iron, and manganese. I mean, even Popeye swore by it!

By the way, being on the subject of Popeye, I recently happened on this article that talked about how Popeye’s spinach-eating ways were all because of a mistaken calculation.

Apparently back in 1870, Erich von Wolf, a German chemist, was researching the amount of iron within spinach and other green veggies. When he was transcribing his findings, he erroneously misplaced a decimal point. Instead of stating that there were 3.5 milligrams of iron in a 100-gram serving of spinach, Wolf wrote down 35 milligrams – which would have been the equivalent of eating a small piece of a paper clip!

When Popeye was created around this time, studio executives suggested that spinach be his anti-Kryptonite of sorts. This error was corrected in 1937 when someone rechecked the numbers – but, I still think of Popeye every time spinach is on my menu!

Getting back to this curried spinach soup, I like to stir in a bit of coconut milk to thin this out a bit. Then I top it with some sliced fresh jalapeños, more cilantro, and (because I am a glutton for all things spicy), a few more red chili flakes.

When I made this spinach curry soup, my daughter added her spin to this recipe for coconut roti. She added in a few pinches of zataar and turmeric into the recipe and wow! The resulting Sri Lankan/African fusion roti is my favorite now! 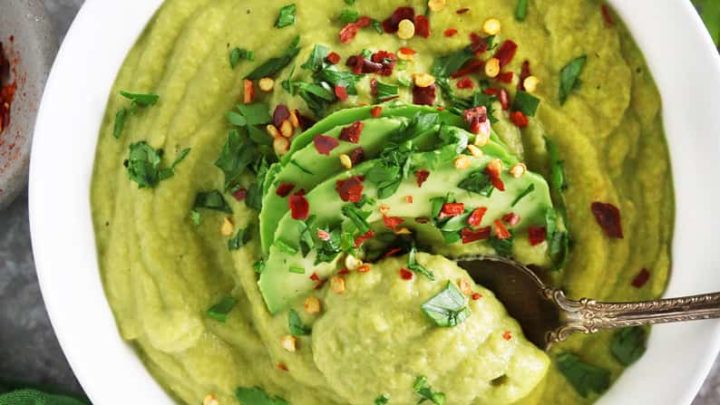 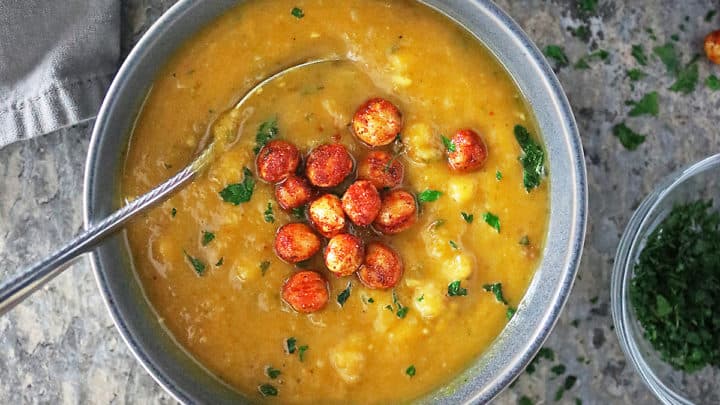 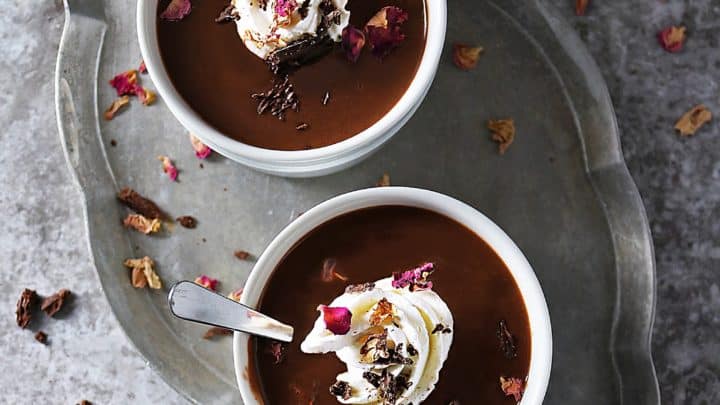 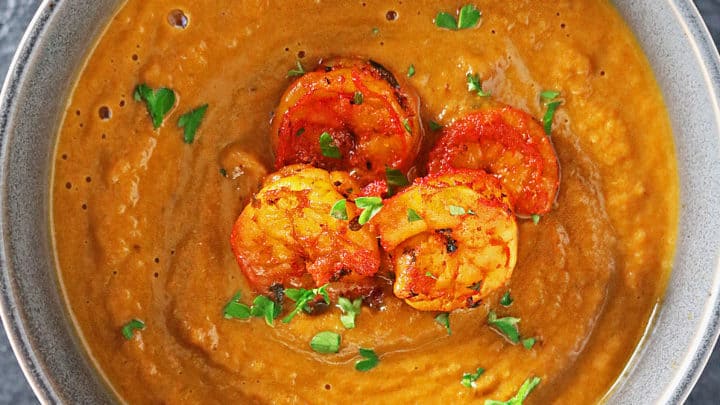 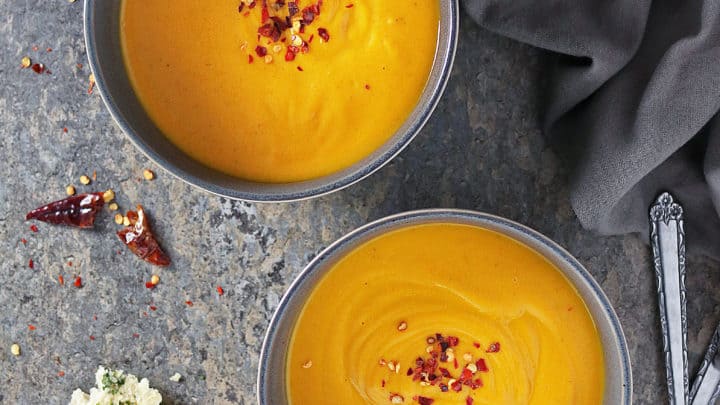 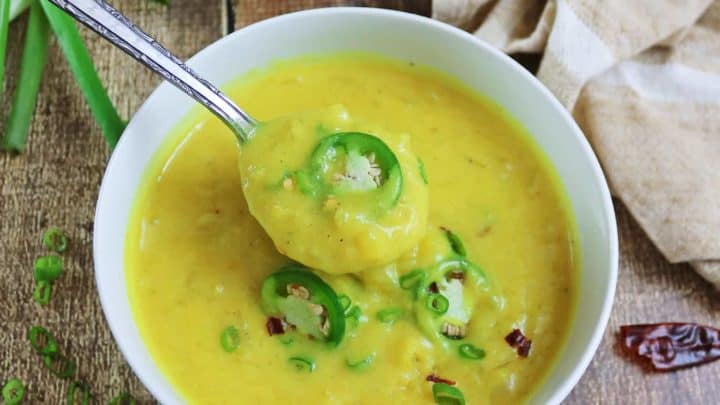 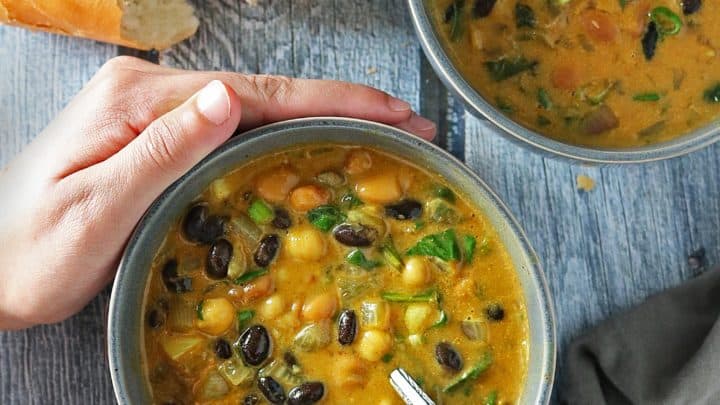 In a hurry? Then garb a can of our favorite grab and go store-bought soup!

What happened to the 10th ingredient? You mention vegetable stock on the page but it isn’t in the recipe. How much stock do you add to the spinach hash?

So sorry for the late reply - the 10th ingredient is cumin -it was in the recipe card but not in the post so thank you for bringing that to my attention. As for the vegetable stock, you can add in a 14 cup to start and then add in another 1/4 cup if you like this soup thinner.

Daughters always add that lovely signature to make everything so better. Loved reading your post-Shashi. Thanks for the recipe.

[…] can add Host Defense Complete Calm Powder to your morning bowl of oatmeal, to a smoothie, to soup, to no-bake snack bites, and even to rich, delicious drinks like this Spiced White Hot […]

Wow, the color of this soup is amazing! I do love healthy soups as (1) they warm me up and (2) they let me eat a dessert or bread without feeling too guilty. I'm putting this one on the agenda for sure! And what an interesting factoid about Popeye. I had no idea - but it explains why Popeye is so strong, I guess. Haha!

We always have spinach on hand and love curry so I know this soup would be a hit in our home. Plus, how pretty is the colour? So vibrant! Love to have a big bowl for lunch today to warm me up. Have a great weekend ahead! XOXO