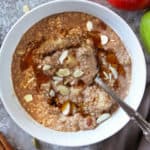 If you need a change from your warm bowl of oatmeal, then you have got to try this Easy Cinnamon Apple Breakfast Couscous instead. All you need is about 10 minutes to whip up this fragrant, delicious, and dairy-free dish. And, it is as tasty warm as it is cold.

In this Easy Cinnamon Apple Breakfast Couscous, almond milk is spiced with cardamom, cinnamon, ginger, vanilla, and almond extracts and brought to a boil. Then, couscous and chopped apple are added to the spiced nut milk. This mixture is removed from the heat and left to sit for 5 minutes. Then all that’s left is for you to sweeten this with your choice of sweetener, and dig in!

Technically, this recipe takes less than 10 minutes. I added in 5 minutes of prep which involved peeling and chopping part of the apple that was used in this. If you are a super speeder apple peeler, then you can have this breakfast couscous recipe ready in about 7 minutes or so.

I love a warm bowl of oatmeal. But, every now and then, I like to shake up my breakfast routine. And, it’s on those days that a bowl of this creamy and easy cinnamon apple breakfast couscous comes into play.

What exactly is couscous?

Popular in North African cuisine, couscous is actually a type of pasta. The term “couscous” refers to small steamed granules of rolled durum wheat semolina. While it might look like a grain and even feel like a grain, it is actually made with semolina flour that is mixed with water.

Are there different types of couscous?

What type of couscous is used in this Easy Cinnamon Apple Breakfast Couscous recipe?

What are all the ingredients used in this Easy Cinnamon Apple Breakfast Couscous recipe?

You will need the following 8 ingredients to make this Easy Cinnamon Apple Breakfast Couscous, and they are:

You will also need a pinch of salt and a sweetener of your choice.

This is such an easy recipe to make. To start, peel and chop up half of an apple of your choice. Then, simply add the spices, extracts, salt, and almond milk together and bring them to a boil. Then add in the apples and couscous, turn off the heat, cover this couscous mixture and let it sit for about 5 minutes.

Uncover this Cinnamon Apple Breakfast Couscous, drizzle in some maple syrup or sweetener of your choice, garnish with some nuts (if you would like), and dig in!

This recipe is dedicated to my daughter. Earlier this fall, she moved away from home to attend grad school. Since she has been away, I have been sending her little care packages with a variety of couscous. Ever since she has been asking me to post a breakfast couscous recipe, so today I am delivering her request.

A few things to keep in mind:

[…] Do you love couscous and want to try it in a breakfast dish? Then check out this super easy and quick Breakfast Couscous recipe! […]

This looks terrific! Love the zesty flavors in this. Thanks!

Inspired! I never thought of using couscous for a sweet dish. And nice flavours too

Such a great change-up from that usual oatmeal! :) Perfect way to start the day.

I imagine eating this christmas morning. It looks so warm and comforting, can't wait to try it!