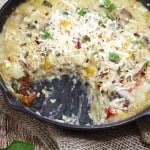 This easy and delicious, savory Baked Oatmeal Risotto is a non-conventional spin on risotto as you know it. It is a filling and hearty dish that is perfect for dinner or even brunch.

How many ways are there to cook oats?…
…is what I was thinking when I came across a recipe for Oatmeal Risotto in the Healthy Living Made Simple Magazine at Sam’s Club, one evening as I was perusing the aisles.

I thought I had eaten oats every which way possible – from overnight oats to oatmeal bowls, to oats ground up in cookies, to oatmeal cakes, oatmeal pancakes, …even delicious oatmeal ice cream! But, when I saw this Oatmeal Risotto, I was flabbergasted – and that’s putting it mildly!

I could not imagine how this would taste – I mean – seriously – risotto – with OATS?!?!

So, I had to do the only thing imaginable – I HAD to make my spin on this oatmeal risotto!

I picked up the largest container of oats I could find at Sam’s Club where healthy living and eating is made easy. I also picked up a few other ingredients I thought I might need to make my spin on oatmeal risotto and rushed home to get dinner ready! (I also picked up some pre-packaged salads for backup – just in case this risotto didn’t turn out as planned.)

Did you know that oats are considered a

From most of the recipes round here on this blog, y’all know I try to eat pretty healthily. I eat oats because I know that they are full of fiber and have an uncanny way of reducing “bad” cholesterol. My daughter sometimes even uses oats as a face scrub!

But, according to an article in the Healthy Living Made Simple Magazine, a diet high in oats can also help improve blood pressure as well as help lower the risk of cardiovascular disease.

This same article went on to mention a study done by the University Hospital Mannheim in which Type 2 diabetes patients who were given oatmeal as part of their diet achieved a 40 percent reduction in their insulin dosage.

Oats were also given a shout-out in the treatment of headaches, depression, tension, insomnia (this must be why I sleep like a rock – literally), anxiety, and nerve pain!

And, hence, their superfood label!

Now, the original recipe for oatmeal risotto specified that the oats be cooked and placed in the fridge for at least 4 hours.

Personally, dinner is always a rush, and 4 hours I did not have. So, I changed that up too. In making my version of oatmeal risotto, I decided to go the baking route. Besides, baking involved only one skillet and one cutting board, and one measuring jar! Less time + less mess = Win! Win!

I also substituted almond oil for grapeseed oil. Though, olive oil works well too. I also used cherry tomatoes instead of regular tomatoes and added in some onion and mushrooms. I started this risotto off on the stove-top and ended it in the oven – and then I asked my daughter to taste test it, while I set up my props and photo area…and before I fully realized what was going on – she had eaten 1/3 of it!

So, I had to make another skillet of it to photograph!

My skepticism of this oatmeal risotto was totally unfounded – this recipe might sound off the wall – but, y’all cannot deny your tastebuds from savoring this level of deliciousness!

Now, please do share – what’s the most unconventional way YOU have tried oats?

[…] By the way, if you love oats, I have quite a few “oatey” treats on the blog for you, such as:• this baked pumpkin oatmeal,• this oatmeal yule log (say what?),• these oatmeal cookies, and• this oatmeal risotto. […]

[…] Unlike oats, couscous is not gluten-free as it is made with Dhurham wheat semolina. Therefore, if you have Celiac disease or are trying to avoid gluten, then you might want to check out recipes for these gluten-free oatmeal pancakes, or this super easy baked pumpkin oatmeal, or this recipe for savory oatmeal. […]

What size is the skillet for this recipe?

Ooo, I never thought to try using oatmeal in risotto! That's such an awesome idea! (This looks amaaaazing! :]!)

I love that you posted this. This is crazy. It kinda reminds me of Upma though, right?? There is this place in NY that makes savory oatmeal, I have yet to try it.